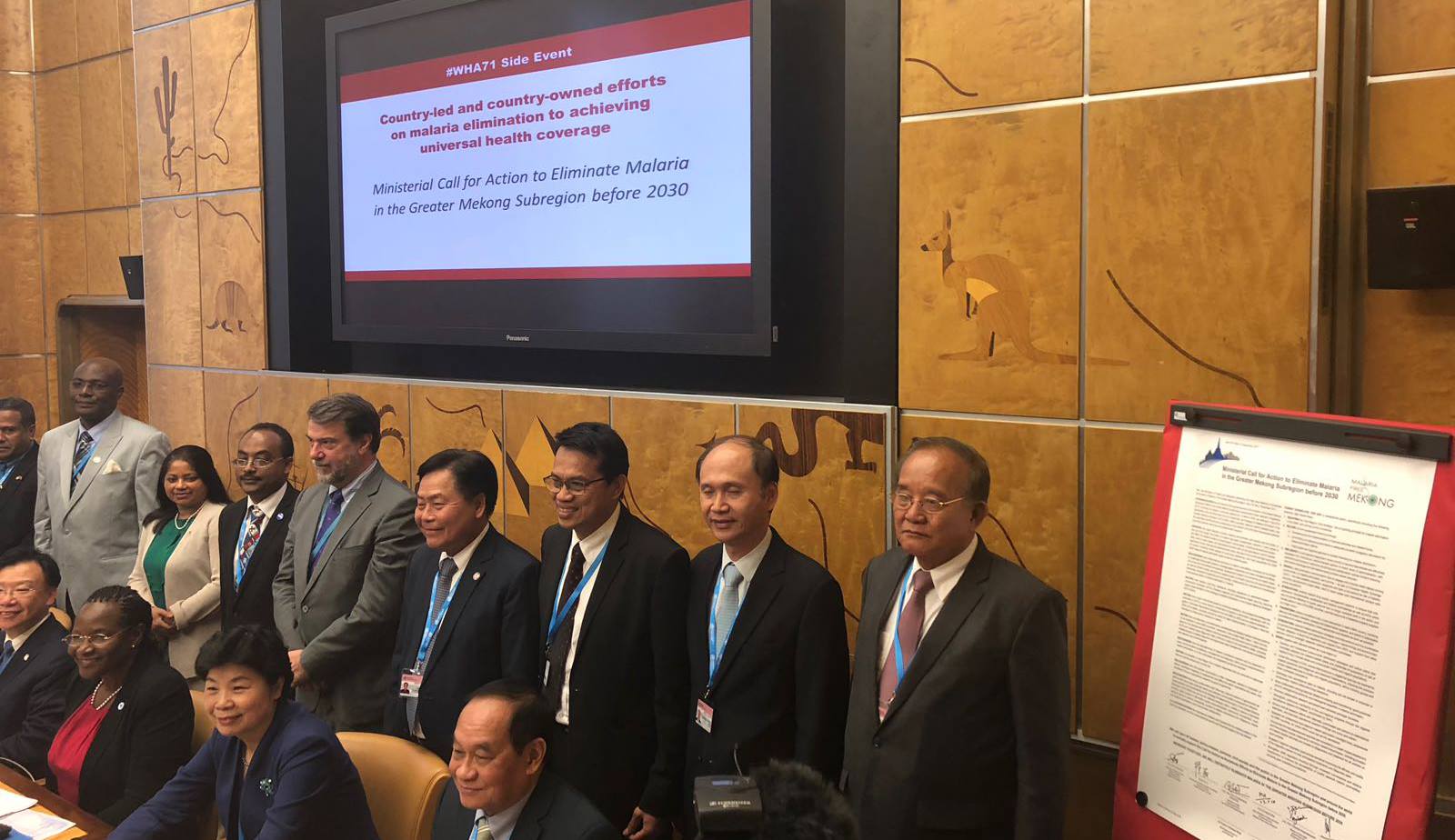 The governments of Cambodia, China, the Lao People’s Democratic Republic, Myanmar, Thailand and Viet Nam have together called for accelerated action to eliminate malaria in the Greater Mekong Subregion (GMS) by 2030.

Signing a joint Ministerial Call for Action at the World Health Assembly in Geneva, the six countries pledged to strengthen how they track and report malaria cases, including drug-resistant forms, and to provide the best possible prevention, diagnosis and care for all people at risk.

“This signing is a historical landmark in the fight against malaria in the Greater Mekong Subregion,” said Dr Myint Htwe, Union Minister for Health and Sports of Myanmar and one of the driving forces behind the joint call. “The GMS is the epicentre for drug-resistant malaria, and country-owned and country-led efforts, along with time-bound targets, are required to defeat it.”

Ministers also outlined the malaria situation in each of their countries, showcasing some remarkable recent progress towards elimination of the disease.

“With years of effort, malaria has been in continued decline in our country,” reported Her Excellency Dr Cui Li, Vice Minister of the Chinese National Health Commission. “China developed a plan of action with the goal of eliminating malaria by 2020. In 2017, for the first time, no local cases were reported.”

Amid concerns about drug-resistant forms of the disease emerging in the subregion, the country representatives stressed that eliminating malaria requires urgent and coordinated action, with support from national malaria programmes, funders and other partners.

“Australia has been a champion for malaria elimination in the indo-Pacific region,” said Renee Deschamps, Acting Assistant Secretary of the Australian Department of Foreign Affairs and Trade. “Australia supported the establishment of the Asia Pacific Leaders Malaria Alliance, which has done a great deal to encourage leadership, including mapping out a roadmap to elimination by 2030.”

The Call for Action appeals to governments and international partners to ensure activities to eliminate malaria in the subregion are fully funded, including through increased domestic funding. It also urges improved cross-border collaboration through an independent oversight body, which the World Health Organization (WHO) will help coordinate.

Over the past 15 years, a massive international donor effort and substantial increases in domestic resources have driven greater access to malaria medicines, distribution of bed nets and better screening. These actions have halved the burden of the disease, averting over 80 million cases and over 100,000 deaths.

Building on this momentum, the heads of 23 governments have set themselves an ambitious goal: to eliminate malaria in Asia and the Pacific by 2030. They formed the Asia Pacific Leaders Malaria Alliance (APLMA) to strengthen their malaria control and elimination efforts, protect hard-won national gains and, ultimately, to defeat the disease throughout the region.

“Emerging forms of drug-resistant malaria in the GMS must be a wake-up call that our progress is at risk,” urged Dr Benjamin Rolfe, CEO of the Asia Pacific Leaders Malaria Alliance Secretariat, based in Singapore. “They threaten a resurgence in malaria-related deaths, which would strain health care systems, cause serious economic impact and create a hazard for neighbouring countries.”

“China stands ready to work with the international community – to strengthen cooperation with countries through the One Belt One Road initiative to support elimination of malaria,” added Dr Cui.

The World Health Assembly is the highest decision-making body of WHO and is attended by government delegations from all 194 of the organization’s Member States.